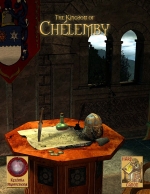 The wind was gusting sou’westerly, filling the still damp sails and bearing the well-laden Karúnè swiftly on. Hârvald Wésen looked out to the north, across the Eván Gívè, and up the river’s mouth. He stood at the bowsprit as the ship cut a furrow up the Vúlden, and his weatherworn face broke into a broad smile as the city’s bustling quays came into view. It had been a long voyage, but they were home... home to Chélemby.

The Kingdom of Chélemby stands at the gateway to the Gulf of Shôrkýnè. It was founded as a wintering station by Ivínian clans in the fifth century, but was a key centre of Járind culture for more than a millennium before that. She has grown to become both the 'greatest city of the north' and a powerful trading state. She is much coveted by her larger neighbours, particularly Hârbáal, but has also acquired some powerful friends, including the mysterious realm of Emélrenè.

Her culture has been influenced by many sources: Ivínian, Hârbaalése, ancient Járind, and immigrant Eméla, Shôrka, Tríerzi, Ázeryàni and Karéjian traders. This has creating a unique political and social climate dominated by 57 noble clans, or Tia-Nalâri, who share the rule of this virtual city-state with a constitutional monarch.

Chélemby's merchant fleet and trading posts connect the worlds of the Ivínian north; the feudal kingdoms of Hârn, Shôrkýnè, Emélrenè, Palíthanè, and Tríerzòn; and the warmer lands of Hèpekéria, Ázeryàn and the Venârian Sea. Chélemby is truly a great hub of the Northwest of Lýthia, from where adventurers, traders and seafarers set forth to make their fortunes, and seek fame and glory.

This module describes the Kingdom of Chélemby. It details the islands' Geography and their Flora & Fauna, including the herring upon which Chélemby depends, delicacies such as the Sênakis Pike and the Sooty Mâlben, and other stranger creatures. Her long History is detailed, from the time when she was a centre of Járind culture, through the Hârbaalese invasions, up to the present day. A Chronology comparing events on the Chel islands with other locations over many thousands of years is also provided.

The Current Affairs and Foreign Relations sections detail both domestic and foreign political and economic conflicts, and many opportunities for both Chelembian and foreign players to take part in events involving Chélemby's long reach.

The Government section includes decriptions of the kingdom's complex administrative systems, key officials, its taxation and revenues, the Royal budget, and the adminstrative divisions of the Kingdom. It also describes the island's three major settlements (Chélemby City, Evánekin and Kolâdis), and lists all its nalâri (manors) and their owners.

The Kingdom's military and naval forces are described in detail in the Military and Naval Forces sections. Extensive descriptions of both vendetta and common Law, and lifeblood of Chélemby, her Economy and Currency are provided.

Chélemby's Society & Culture are a unique blend of Ivínian and other social customs. The Tia-Nalâri clans dominate the nation's population, politics and economy, but others seek their place in the sun. Details of the role of thralls, of personal names, adoption, Hûsgaran (huscarls) and shield maidens are all provided, as well as a description of marriage customs. Information on clothing, food & drink, bathing, poetry, song, theatre, decorative arts and sports and games fill out a full picture of the lives of the Chelémbians.

Religion is a complex issue on Chélemby. While Sárajìnians are in the majority, there are significant numbers of Ágrikans, Laránians, Haléans and Peónians, and small numbers professing other faiths. The islands are rich in Folklore and Mystic Places, including the tales of Aéric the scholar searching for the lost Jarind town of Témian, said to be the location of the Circlet of Témian; or the jewel mines of the ancient Yârynè; or legends of the lost clan Évan. Several ongoing feuds are almost legendary in themselves, adding recent stories to those told of the ancient ruins such as Dínibôr, Mýrian, or Zhôrian. The islands of Chélemby present a great deal to explore. A Glossary and list of common names provide a guide to those who might otherwise find this complex place a little heady.

Chélemby is richly illustrated throughout, and interactive bookmarks and links make it easy to find anything quickly. Kingdom of Chélemby will also print well (in colour or black & white) if you want hardcopy at your gaming sessions.

The Kingdom of Chélemby provides a wonderful home-base for groups of adventurers to explore the wide world of the Northwest of Lýthia.

Keléstia Productions provides a range of free downloads to support GMs and players using Kingdom of Chélemby and other Chélemby Publications. These can be be found on the Chélemby Downloads page.

A preview of this product is available for download here.